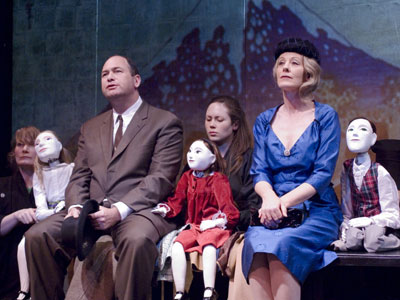 Tonight we saw LONG CHRISTMAS RIDE HOME at the Magic. What can I say? It’s a Paula Vogel play, so it’s wonderful, nonlinear, magical. It’s basically two parts: one with puppets portraying children on the ride home after a traumatic holiday; the other with adults portraying the grown-up versions of the puppets. It’s poignant, it’s clever, and there are some amazing theatrical moments with the puppets and other found objects. I personally found the portion where the actors are grown a little less interesting, but I guess that’s to be expected: just like an actor is always upstaged by little kids and animals, they must also find a puppet a tough act to follow.

Technically, I already knew that I made it into the BASH portion of the festival. But today they made it official and told us who else is in the festival, and I couldn’t be more excited. One of the best parts of being in the festival is getting to go on a retreat with the featured playwrights, where we all read all work and get input. Who wouldn’t want input from the people featured this year?

BASH! (Bay Area Shorts):
Beyond Words (excerpt), by Tim Bauer
Your Money Is Safe, by Molly Rhodes
He & She, by A.P. Saito
Hailey’s Comet (excerpt), by Christopher Tong

Full Lengths:
American As, by KEN PRESTININZI
The Danger of Bleeding Brown, by ENRIQUE URUETA
The Kepler Project, by DOUG JACOBS, NINA WISE and mathematician RALPH ABRAHAM
Kitchen Table, by EUGENIE CHAN
Lascivious Something, by SHEILA CALLAGHAN
When Something Wonderful Ends, by SHERRY KRAMER

So this is the wrap-up of my week in Omaha. I can’t say enough about how much fun I had and how much it’s recharged my batteries and gotten me excited about creating more theater. On Friday, the festival started to become what I think it wants to be. Most nights have been ending around 10, after a performance of an Albee or a Kopit work. Tonight, Tim S. directed a late-night staged reading of a Mac Wellman work-in-progress at a fringe theater in downtown Omaha.

It was fantastic. Like much of Mac’s work, it’s impossible to describe. Suffice it to say that the stage directions are a major character. There’s a dwarf in a fez, a crowd of thousands, and a talking car. And, as Mac said after the rousing ovation, “No good will come of it.”

Mac has been one of the true joys of the conference. He has an impish way of critiquing people’s plays by suggesting they read some play by some author so obscure we wonder if he isn’t making it up to send the writer on a wild goose chase. His master class was brilliant, with him telling everyone to write the impossible, to create a theater of wonder.

The conference ended with a gala, and then a bunch of us went off to find Omaha’s gay bar. When it closed at one (?), we made the artistic director of the aforementioned fringe theater let us in for boxed wine and hanging out onstage. A very late night, with a very early flight in the morning.

So I’m in Omaha for Edward Albee’s Great Plains Conference and I finally have time to blog a bit. I arrived on Saturday and met my roommate, Clarence Coo. He’s a wonderfully nice guy and a perfect roommate. We’re splitting a room in the Embassy Suites, which means we each get our own room — I’m in the actual bed and he’s in the living room on the couch, and tomorrow we switch. Privacy at half the price; can’t beat it.

The conference features the same thing every day: three short readings from nine to noon; lunch and a lecture from someone like Edward Albee, Mac Wellman, Arthur Kopit or Kathleen Chalfant; a master class from one of the “celebrity playwrights;” a reading of a full-length play followed by critique from said masters; dinner on our own; and a performance of some sort in one of the fancy Omaha theaters.

I’ve been having a blast. Since Clarence and I arrived together, we didn’t have any of that awkward standing around waiting to join a group. Instead, we were a group, and people joined us. As of this moment, our little clique has grown to a group of about ten playwrights from around the country, mostly the younger and more alt.theatre crowd. The ones who are starstruck by Mac Wellman, instead of wondering who he is. You know, the types of people who read this blog versus the types who just learned about blogs from CBS Sunday Morning.

I’ve also been struck by what a great theater scene Omaha seems to have. Most of the actors are from here, and they are surprisingly terrific. The whole city, in fact, is pretty cool, with the sort of indie vibe you used to find in Austin in the late 80’s. There’s the Saddlecreek folks, the whole Bright Eyes thing, and a nice feeling of being the only liberal city in a crazy red state. Again, not unlike Austin. Plus, it’s been hot as hell.

Highlights for me so far have been:

Two more days. I hope to write more, if I get time. 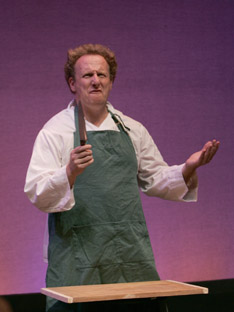 So tonight was the audience talkback portion, where me and Ross and Brady sat onstage being interviewed by Michael Paller from the American Conservatory Theater. I usually get really nervous at these kinds of things because, let’s face it, the play’s already up and running. Any audience feedback can’t be incorporated, and the audience knows it. So, usually, people just end up asking really weird questions.

Luckily, I’ve had dinner with Michael and run into him here and there, so it felt less like an interrogaton and more like hanging out with some theatre people. I wasn’t nervous at all, and most of the questions ended up being about the process of the PlayGround: How can you come up with a play in only four days? How did the topic influence the piece? And do you get to rewrite before the production? All easy to cover.

No one asked whether Eric Hayes, pictured to the right as Grezwyk in my play, was speaking a real foreign language or just gibberish. I’ll assume that means they figured it out.

Still a little tender, though, so it was a weird opening night. Mainly because I know when people are frazzled and missing lines. Plus, Mary, who has a huge monologue in a play (one play is a 10-minute long speech) got a little lost and skipped the part that, to me, makes the whole play come together.

But, since Danielle isn’t in my play, everything went pretty much exactly as planned. Seemed to go over pretty well: got laughs in the right places, and the actors are starting to figure out little moments that they’re making their own. What more could you ask?

The picture, by the way, is Danielle in Brady’s play THE SEWERMONSTER DIARIES. A wonderfully skewed little play about a woman/sewermonster who lives underground and preys upon San Francisco yuppies. A fun way to start the night.

Tonight was the dress rehearsal for the Best Of PlayGround Festival. My play NOWHERE MAN is the last play of the evening, which became a problem tonight because Danielle Thys, one of my favorite actors in the world (and the muse of the writer who runs the writer’s group I’m in) — is injured! Out for at least a day. Which meant that the first dress, scheduled to start at 3, didn’t start until 4, while they figured out how to shuffle the women in the show to cover. Which then meant that, when dinner was called at 6, my show hadn’t been rehearsed.

It did, however, make it into the final dress, at 8. And it went pretty well, considering that some of my actors were now doing double duty and so were a little fried by the end of the show. I love how George has staged it, with each actor sticking to their own part of the stage until they subtly converge upon the old man, who has his back to the audience for the entire play. There are one or two small things I’m going to see if we can change — specifically, a hand gesture that makes the old guy look like a jerk right when we’re supposed to be sympathizing with him — but overall I’m very pleased.

Tonight was the benefit for the PlayGround at Berkeley Rep. For the past two years, I’ve been part of the PlayGround Writers Pool: thirty-six writers picked to write 10-minute plays on a variety of themes throughout the season. We get the topic on a Friday and have to turn in the play on the next Tuesday. They pick the best six for staged readings, and then the pick the best of those for a full production in a festival.

This year, my play NOWHERE MAN got selected for the Best of PlayGround festival. It’s an odd little play, different for me because it features direct address and nothing but. I’m not usually a fan of direct address (despite the title of this blog) because I’d rather see the characters going after each other; which is why I specifically decided to try my hand at it. I guess people dug it, because it’s in the festival, it’s getting published, and it’s led to me being named a PlayGround Emerging Playwright.

Since this is the 10th anniversary of PlayGround, they’re also doing a Best of The Best, with some of the best from the entire ten years also being featured, including the one that led me to apply for PlayGround in the first place: Tom Swift’s MY NAME IS YIN. Goddamn, that is one awesome play. I saw it three years ago and I can still picture every second of it.

Not a lot of people in San Francisco know this, but back in my Austin days, I was the literary manager (officially called the “literary associate”) of Frontera@Hyde Park Theatre. This was right after the legendary Megan Monaghan left to go to Minneapolis, and I was brought in first as an intern and then ended up running the department, coordinating the volunteers, computerizing the responses, and answering letters addressed to Megan because the Dramatist Sourcebook listing was about two years behind.

I really enjoyed the job, particularly getting a chance to read great stuff hot off the laser printer by people like Erik Ehn, Daniel Alexander Jones, Naomi Iizuka, Sharon Bridgforth, Ruth Margraff and Steven Tomlinson. And I was missing it. So, since I know the Magic’s Mark Routhier from the PlayGround, I asked if he needed any help reading submissions. And I just so happened to ask right at the exact moment that someone left the Literary Committee. So I’m in!

The committee meets once every two weeks, and about 10 of us report back on the exciting submissions we’ve read recently. The nice thing is, almost the entire discussion is about things that people like, so it doesn’t spiral into negativity. And I get to read the occasional hot off the laser printer stuff by people like Elaine May. Plus, there are bagels. Cool!

Thanks to Mariella, who has been doing a blog about travel that’s taking the world by storm, I’m now an official blogger. I’ve had humor sites and business sites and other sites, but this is my first step into the actual blogosphere. So blame her.