Hooray! Last night, I was finally able to attend a Theater Pub event. As you know, I’ve been a huge fan of these folks since I first heard the phrase “theater in a bar.” But I’ve recently been hosting a staged reading series that conflicted with both Theater Pub and PlayGround. (Who knew that “the third Monday of the month” would be the most popular night for theater?)

Now that the readings I’m hosting are moving to the first Monday of the month, I’m free to go back. And this was such a great one to go back to. A series of Odes to all the various people who work in the theater, from the writer and producer to the lighting designer and concessions.

I’d gotten a little overloaded on theater in 2011, so I’ve been taking it slow this year, easing back into seeing stuff. What a great way to jump back in: with a tribute to all the fun people you get to hang out with when you make theater. Got me excited about getting back out there again, and what more could you ask than that?

Plus I got to talk to Marissa Skudlarek, who wrote two of my favorite odes, and I sat by my Facebook friend Robert Estes, who I didn’t even realize was directing four of the odes.

I don’t often delve into the theater marketing discussion. Partially because others do it better, and partially because I hate the phrase “butts in seats,” which you’re obligated to use at least twice whenever you write about arts marketing.

But my friend Ian Walker over at Second Wind has kind of an interesting program going, and I thought that some of the #2amt folks might find it worth digging into — and that some of the plain old theater-goers who read this blog might want to check out.

It’s called the “Elite Pass,” and it opens up the whole process of making theater to anyone with a pass, essentially turning you into a “member” for several months. Besides some of the usual premiums theaters offer — a ticket to the show, half off concessions, additional tickets at a discount — there’s some pretty cool stuff like:

It strikes me as a pretty innovative way to get audiences involved. I don’t know what it will do about butts in seats, but I figure I ought to throw that in one more time.

Z Space’s Board of Directors and Executive Artistic Director Lisa Steindler are pleased to announce the appointment of Lori Laqua as Executive Director. Laqua brings over two decades of senior leadership and management, strategic planning, and fundraising to Z Space.

2011 was a pretty good year. In fact, looking back over it all, I kind of can’t believe how much I did:

Probably need to do some rebalancing for next year, but that’s for tomorrow, when I do my 2012 plan (inspired by Marisela’s work plan).

Second Wind Theatre’s blog is devoted to “opening up the process of creating theatre,” which means it’s only active when they’re in production:

Actors need privacy to explore and take risks in order to give the most truthful, powerful performance they can. Designer’s need quiet and solitude to create and refine their ideas. Playwrights, tasked with creating a richly detailed and complete world, need privacy and solitutde to imagine, explore, and document that world. So while at times I wish I could continue the online conversation, there are periods when I need to withdraw into my creative cave, my only offering being the promise of something wondrous upon my return.

Well, they’re in production, and engaging with the public in really cool ways:

Over the next three months we’re going to being pushing the boundaries of the sharing process. This blog will come alive again. This time round, I’m hoping to open the discussion even further, talking with theatre pros from other companies and organizations. In addition to producing a new piece of theatre, we’re exploring some new ways of doing business— of involving audiences and promoting discussion.

I wanted to let you know about something that’s quickly becoming a San Francisco indie theater tradition: PianoFight’s FORKING II: A Merry FORKING! Christmas by my friend Daniel Heath.

Someone who’s good at math figured out that this choose-your-own-adventure-style play, where the audience votes on how the plot will proceed, has 362,880 possible paths to the final outcome.

So you could see this show every single night of its run — which is from tonight through Dec 30, by the way — and still not see every possible permutation. Unless maybe they hold it over for 994 years. 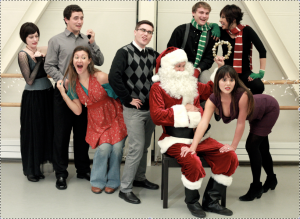 You may remember me writing about PianoFight back when I had a short play as part of ShortLived 3.0, the largest audience-judged playwriting competition in the country. I also mentioned them when SF Weekly named them San Francisco’s Best Up-and-Coming Theater Company.

But I was remiss in pointing out their latest news, which is huge: they recently signed a lease to develop the old Original Joe’s at 144 Taylor Street into a huge entertainment complex, with a theater and a bar and probably some other stuff but who cares since we’ll all be spending our time at the first two.

So I wanted to make sure that FORKING II was on your radar so you don’t miss it like I did last year. It’s definitely on my December must-see list, especially since Daniel’s an incredibly funny guy/talented playwright. He also makes fancy cocktails with obscure ingredients, but that shouldn’t sway your decision.

It’s at the brand new Stage Werx Theatre at 446 Valencia in San Francisco’s Mission District, and information can be found here.

San Francisco…is by some counts the largest community of small theatre companies in the nation, which is something I wish we made a bigger deal of. Our major companies can compete, quality-wise, with NY and Chicago; but it is our “little theatre” diversity and energy that really stands out. Funders should take note; so should reviewers; so should NY and Chicago. One thing it’s missing (which draws playwrights & producers to NY), is the ability for a show to expand and continue its run when it does well. Here, our runs are for a relatively short, set duration, and great shows are often forgotten after a few months. We should take note of that.

How ’bout that?! My friend Ian is playwright #407 to be interviewed by Adam.

Two of the minutes were written by me, and there are about 70 other minutes by 45 or so local playwrights.

Perfect for people who have already grown bored with this post.

From a goddamn brilliant article by Mark Jackson on HowlRound:

The next day Chloe [Veltman, critic for SF Weekly] ran into Rob Avila, critic for the San Francisco Bay Guardian, who said he’d just had the same conversation [about critics and playwrights mixing more] with director John Wilkins. Chloe got us all together, along with actor Beth Wilmurt and John’s wife, producer Kimball Wilkins. We ate, drank, and talked seriously about the theater. Mostly we talked about how talking about the theater is as vital to the theater as food is to the body, and that the various strands and strata of the local theater community could benefit from intersecting more often and directly….

Since then we have continued to throw salons roughly every four months….What is consistent from salon to salon is (1) we pick a specific topic or question for discussion, (2) ask our guests to arrive on time and bring a bottle of their favorite beverage, and (3) that it is a non-networking event where everyone is invited to (4) eat, drink, and talk seriously about the theater. We make a point of inviting a mix of past attendees and newbies, gathering at the table people from all corners of the community….It isn’t just the critics and artists who should talk to one another more, but everyone.

This is such a wonderful idea, and the article — which is so well-written that it’s almost impossible to excerpt — is beautiful and inspiring. You should most definitely read it!

Full disclosure: Way back in the day, Kimball Wilkins and I shared an office at our mutual day job. Wow, that seems like such a long time ago.

From an article by David Loehr on stage-directions.com:

“Free for all.” “Membership has its privileges.” “All you can eat.” Theatres around the country are taking these sayings to heart. In recent years, many smaller companies have presented shows for free with donations, or featured special pay-what-you-can performances, but larger theatres have taken note, too….

A common thread is talk of building community as opposed to selling shows. Each of these companies presents multiple events and productions during any given month. The main idea behind the “all you can eat” pass is the idea of turning a theatre venue into a social hub for a community, creating a place to be instead of merely a place to go. By creating more opportunities to attend the theatre—and by removing barriers like price or exclusivity—the theatre becomes a viable option for many when compared to movies, restaurants or even Netflix. After all, Netflix and the like will still be there when the theatre production is long gone.

Cool round-up of various theaters trying out new pricing models. Has anyone thought about this in the Bay Area?